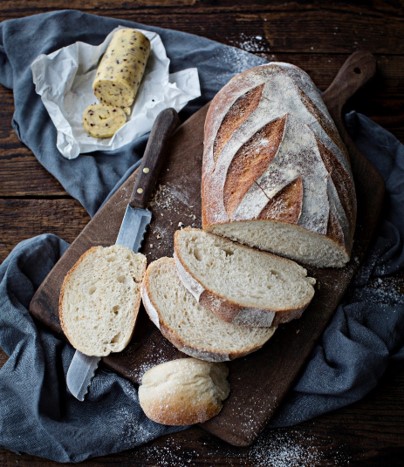 Sourdough bread is one of the tastiest and healthiest bread available. It has risen in popularity over the last number of years, being found in numerous bakeries & patisseries, but it has been around for much longer! It is one of the oldest forms of grain fermentation which originated in Ancient Egypt around 1,500 BC. It was the main form of bread leavening until baker’s yeast replaced it a few centuries ago.

Leavening is the process of the dough rising during the bread-making process as a result of gas being produced while the grain is fermenting. Commercial baker’s yeast is used for most leavened breads to help the dough rise. In sourdough bread, wild yeast and lactic acid bacteria leaven the bread and help the dough to rise.

What is Sourdough Bread?

Sourdough bread takes time and dedication. First a “starter” is made with a mixture of wild yeast, lactic acid bacteria, flour and water. The starter ferments the sugars in the dough, helping the bread to rise and develop its unique, tangy taste. The dough takes much longer to ferment and rise than regular bread which gives it a chewy texture.

Sourdough is more nutritious than other types of bread however the exact nutritional composition depends on the flour that is used to make it. Some commercially produced sourdough breads are not made using traditional methods, thus reducing the health benefits. At The Butler’s Pantry, our sourdough bread is made in the traditional way by hand daily.

Wholegrain breads contain lots of minerals including magnesium, potassium and zinc. The presence of phytate (phytic acid) in your body limits the absorption of these minerals. The lactic acid bacteria that is found in sourdough lowers pH, which helps to lower phytate content. Studies also show that the lactic acid bacteria present in sourdough bread have the ability to release antioxidants during the fermentation process.

Sourdough bread can be easier to digest than regular bread. This is thought to be due to sourdough’s probiotic properties and prebiotic content. Probiotics are bacteria that are beneficial in the gut while prebiotics are fibres that feed the beneficial bacteria and are non-digestible.

It is widely thought that sourdough fermentation can also degrade gluten which can cause digestive problems for people with gluten intolerances.

Sourdough bread has low glycemic index (GI) which measures how food affects blood sugar. This slows down the speed at which sugars enter the bloodstream and means that it is less likely to produce a spike in blood sugar levels.

Sourdough bread is extremely popular across the globe from the Middle East to the USA. Its health benefits and delicious texture and taste make it a wonderful choice in our sandwich platters for corporate catering. Another great way to help to look after your employee’s health and wellbeing.

Want to join the discussion?
Feel free to contribute!